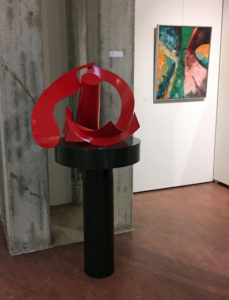 For the second time De Ploegh has organised a Wintersalon with work from 31 artists. Just like the salons of old in Paris the gallery will be filled from plinth to ceiling with pieces of art. 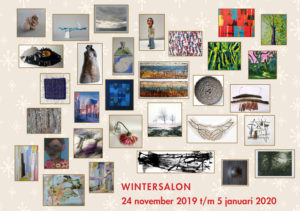 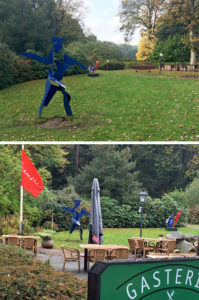 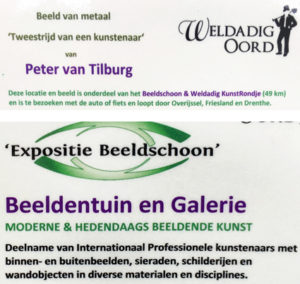 My two sculptures are located at Logement & Gasterij Frederiksoord. This location is part of the KunstRondje of 49 km in the area of ​​the Free Colonies of Benevolence, a unique area of Dutch history located in Drenthe, Friesland and Overijssel provinces.

Iron Man (1996)
This work work shows a person, a man, staring into the distance. As a person of iron, he stands still with his eyes on the horizon. The art is anything but ice cold, but requires a sharp and steadfast look at reality. That view indicates how wide and limitless art is.

Internal conflict of an artist (2019)
This artwork was originally created in honour of the 200-year birthday of the North German writer of realistic novels Theodor Fontane. It brings together in abstract form his sympathy for human freedom and freedom of expression on the one hand, and conventions and moral leadership on the other. The shape of the work is vaguely reminiscent of a person who raises the glass of freedom in one hand, while the other hand embraces a sword-shaped object that symbolises coercion. The colours are tailored to these symbols: red for a warm, possibly revolutionary gesture, light blue for a neutral consideration, and dark blue for cool repression.

In 2019 the Mondriaanhuis (House of Piet Mondriaan) in Amersfoort exists 25 years. In honour of this, the museum is organising an exhibition by members of the National Artists’ Society De Ploegh in Amersfoort with 2D work of 25 x 25 cm and 25 x 25 x 25 cm for work in 3D. 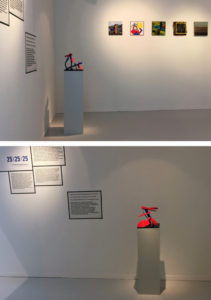 I am participating with a small sculpture: Mondriaan’s Trees. Normally I make spatial work from metal, but the required small size (25x25x25 cm) does not allow that. I have chosen for the material I use for models: cardboard, reinforced with polyester. The work is autonomous and suitable for indoor use. But it can also serve as a model for a possibly larger sculpture from metal for outside. 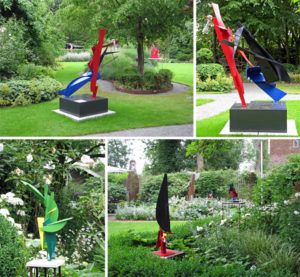 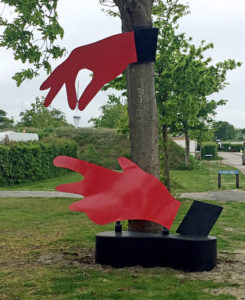 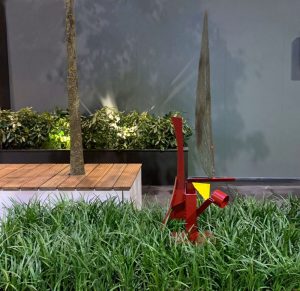 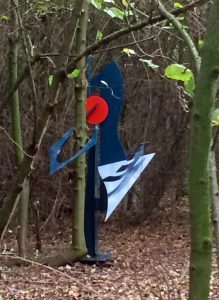 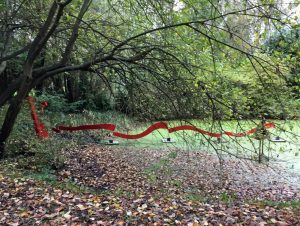 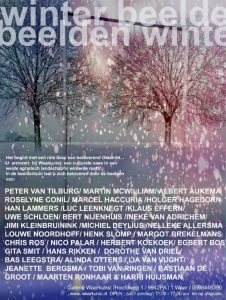 Winter exhibition Winterreise
Sculptures of 30 artists in a white landscape give a different experience than in the green of summer. The sculpture garden is illuminated during the night. 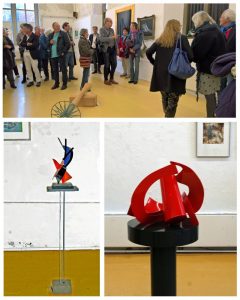 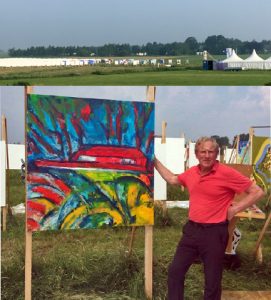 The Frisian capital of Leeuwarden has been selected as European Cultural Capital 2018. The idea for this year’s new version of The Colourfield Performance is to create a collaborative work of art in the form of ultimately 499 paintings. This fits well with the year’s theme Community. The work of art has the dimensions of a land-art style project: in an open landscape easels are erected on wooden stakes. The easels with white panels are arranged to create an equilateral triangle of 233 meters each side. The number 233 comes from the Fibonacci Series, which is intimately connected to the Golden Section. The shape of a triangle was chosen because this mathematical form behaves autonomously towards the structure of the Frisian landscape.
During the four months of the exhibition 34.000 persons visited the Colorfield Performance in Sloten.
The Colourfield Performance website
Final version (YouTube 1)
Final Version (YouTube 2)